Events excel by combining learning with networking. That’s why event sponsors look for ways to encourage attendee engagement - with the event sponsor’s team and with other attendees.

Event managers tell us they have lacked collaboration technology to encourage private social networking before, during and after major conferences and events. Typically, their existing networking tools do not integrate well with event management software and can only link to personal networking sites.

True, you’ll find plenty of mobile apps for event attendees on the market, and many claim to have great social networking capabilities. But most apps suffer from two pitfalls:

So much for setting up the problem.  Now, as reported by Meetings & Conventions, there’s a solution!

Omnience is a long-time supplier of technology and event services for IBM, which annually hosts dozens of huge events.  IBM asked Omnience to help market IBM Event Connect, its cutting-edge, cloud-based mobile app for increasing attendee engagement at key meetings.  IBM tailors IBM Event Connect for a specific event, enabling the event sponsor to maximize opportunities for social networking experiences before, during and after the event.

You might be interested in how IBM Event Connect was born.  For one of its largest marketing events of 2014, IBM created a special mobile app to facilitate private networking by attendees, speakers and IBM participants.  The app itself was based on a customized version of IBM Connections, a sophisticated platform for empowering collaboration among individuals with a common interest. The app was a huge hit—and to IBM’s surprise, many attendees asked how they could get a similar app tailored for their organizations’ events. IBM responded quickly to this need—and approached Omnience to help bring it to market.

Three things to know about the Omnience-IBM relationship

Do you have a big event coming up where you want to maximize attendee engagement?  If so, check out the key features of IBM Event Connect here, and then let’s connect with IBM to learn more about your event’s requirements. Casey Cote is the Chief Executive Officer for Omnience. Joining the company in 1995, Casey established its strategic direction as the industry leader in marketing event management and a technology innovator. He launched initiatives that made the company a pioneer in applying technology to the challenges of managing a large portfolio of events. Casey is also actively involved in managing customer relationships, seeking out partners and acquisitions, and directing the company’s expansion into new markets. Previously, Casey managed forecasting and budgets at Sprint.

This article was posted in Uncategorized. Bookmark the permalink. Follow comments with the RSS feed for this post.Post a Comment or leave a trackback: Trackback URL.

The Path to Event Excellence [INFOGRAPHIC] 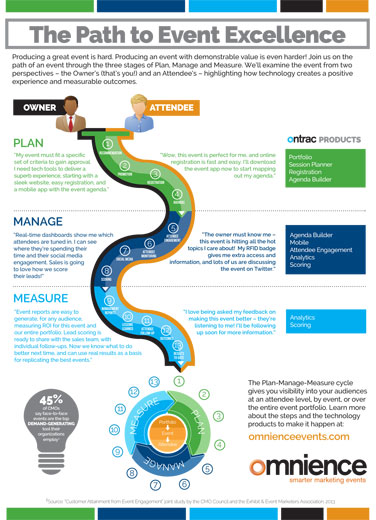